This is the story of Henry

Henry
A local realtor contacted us about a house she had for sale that seemed to have a ghost. The stagers of the house had several encounters, as well as some of the people who had come to look at the house. Our team gathered and discovered a cantankerous old man, "Henry," who had lived in the house before the previous owners. Henry had passed away in the house, but never left. He was not very happy with the remodel or with the way things had changed in his neighborhood. In his day, he would get on his horse and ride through the Sylvan Hills to the local pub.
This is a video of the team releasing the spirit of "Henry" from his house in Portland, OR.
You can see his spirit on the wall in the corner of the video between two of the team (It's at about 1:30 sec. into the video. Look at the wall, in front of the profile of the woman in the foreground.)
Before his release, he asked for a shot of whiskey and a cigar. We obliged and following the offering and a cleansing fire, Henry left us his heart
as a depression in the burned salt.  Bon Voyage Henry! 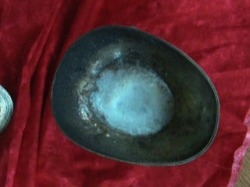